The Astrospurt is KMA’s take on the lush and atmospheric 4-stage JFET phaser. Often known for its one-knob design, KMA has elevated this classic phaser circuit to modern standards, sporting controls for speed, depth, mix, overall level as well as a unique emphasis mode, which opens a whole new world of crackling, screaming and oscillating phaser tones.

But that’s far from where the sonic journey ends. On the inside you’ll find 4 DIP switches, which lets you turn this pedal into everything from a growling distorted space-engine ready for take-off to a glitchy laser-firing ray gun built on alien technology. 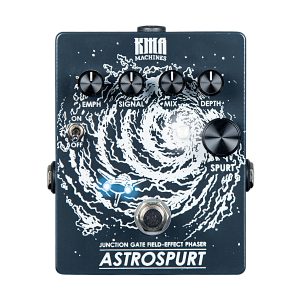